When a person is seriously injured in a Washington car accident, it is important to identify all potential avenues of recovery to help fully compensate the victim for their loss.  When an accident occurs in a parking lot or other private property, the property owner or business proprietor may have some liability for the accident, depending upon the facts of the case.

END_OF_DOCUMENT_TOKEN_TO_BE_REPLACED

Following a Washington automobile accident, insurance companies often rush to settle with any injured victims.  When injury victims settle too quickly, they may not be fully compensated for their injuries. If the injury victim settles with the insurance company and agrees to release the other driver from all claims, he or she will generally not be able to recover for injuries discovered or treatment received after the release.

The plaintiff was involved in a vehicle accident and received medical treatment for his injuries.  Although the plaintiff’s English is sufficient for his day-to-day activities, he uses an interpreter for legal and medical matters.  An insurance representative called him less than a month after the accident to discuss settlement.  The call was recorded.  The insurance representative stated that purpose of the recording was “to verify that in exchange for [$3,785.51]” the plaintiff agreed to release the defendants “for any and all claims known and unknown for injuries [he] sustained in as a result of the accident…” She asked if he understood and agreed to release the defendants in exchange for $3,785.51.

END_OF_DOCUMENT_TOKEN_TO_BE_REPLACED

In a Washington negligence case, the plaintiff must prove the defendant breached a duty of care and that the breach was the proximate cause of the plaintiff’s injury.  Generally, there is not a duty for one person to prevent someone else from causing injury to another person, but there may be a duty if there is a special relationship.  School districts, due to the custodial relationship with their students, may have a duty to take reasonable steps to prevent a reasonably foreseeable harm to their students.

In a recent case, a personal representative sued a school district after a high school student was killed in an accident off campus.  A physical education teacher took the class for a walk off campus.  The school had policies requiring teachers to get parental or guardian permission before taking students off campus for an excursion or field trip.  The teacher did not follow those policies, but the defendants argued they were not applicable to the walk off campus.  The teacher claimed the principal had approved him taking the class off campus, but there was conflicting information regarding exactly what the principal knew.

The teacher did not get any additional adult supervision.  He walked with the students on the sidewalk beyond the school safety zone.  The speed limit was up to 40 miles per hour.  Some of the students were up to 200 meters away from the teacher at times.  The appeals court’s opinion stated students were “explicitly granted permission” to cross the street outside the designated crosswalks.

END_OF_DOCUMENT_TOKEN_TO_BE_REPLACED

Unfortunately, in some cases, a Washington car accident victim’s biggest adversary may be his or her own insurance company.  Washington automobile insurers must offer personal injury protection (PIP) coverage to their policyholders.  PIP provides no-fault coverage for the insured’s medical expenses arising from an automobile accident.  Insurers must conduct a reasonable investigation before they deny claims.  Additionally, Washington law provides that it is an unfair practice for a PIP carrier to deny benefits for reasons other than medical bills that are not reasonable, necessary, related to the accident, or incurred within three years of the accident.  Sadly, it is not uncommon for an insurer to wrongfully deny the claims of its own insured.

In a recent case, the plaintiffs pursued class actions in federal court against their insurers, including claims under the Consumer Protection Act (CPA) for wrongfully denying their PIP benefits.  One plaintiff alleged that the insurer refused to pay medical bills if a computerized review determined that the bill exceeded a predetermined amount.  The plaintiff alleged that the insurer failed to investigate or make an individualized assessment of the charges before denying them.  The plaintiff argued that this practice constituted unfair practices under Washington insurance law.  WAC 284-30-330 and WAC 284-30-395. She further argued that the practice resulted in a routine failure to pay reasonable medical expenses in violation of Washington insurance law.

The second plaintiff argued that his insurer terminated PIP benefits once an insured reached Maximum Medical Improvement, which he alleged was an unfair practice under WAC 284-30-395. He argued that this practice resulted in the routine failure to pay reasonable medical expenses in violation of RCW 48.22.005.

END_OF_DOCUMENT_TOKEN_TO_BE_REPLACED

Following a Washington automobile accident, a seriously injured person may have to deal with various insurance companies. Although dealing with an insurance company can be difficult, insurers are prohibited from acting in bad faith or engaging in unfair practices.  If the insurer does act improperly, the claimant may be able to pursue an insurance bad faith claim.  In a bad faith case, the insurer’s files may be important evidence.

In a recent case, the plaintiff sought documents and information created during litigation of the bad faith case. The plaintiff was injured in an automobile accident with a drunk driver.  After settling for policy limits with the at-fault driver’s insurance, she filed an underinsured motorist claim.  According to the appeals court’s opinion, the underinsured motorist policy limit was $50,000.  The insurer offered $2,500.  The plaintiff demanded $100,000.  She ultimately filed suit against the insurance company for unfair claims settlement practices and bad faith.  She alleged her damages “far exceeded” the policy limits.

In response to discovery requests, the plaintiff denied the damages payable by the insurer exceeded $75,000, which is the threshold amount in controversy for a case to be removed to federal court on diversity jurisdiction. She responded to a question regarding whether she sought trebling or any multiplier of damages affirmatively. She also stated she intended to seek punitive damages if there was a determination the insurer violated the Insurance Fair Conduct Act.  She acknowledged the amount in controversy could exceed the $75,000 threshold, but offered to stipulate that the amount in controversy did not exceed that $75,000.  The parties never reached agreement on the language for the stipulation.  The insurer informed the plaintiff it would seek removal if the plaintiff did not sign the stipulation.

END_OF_DOCUMENT_TOKEN_TO_BE_REPLACED

In a Washington automobile accident, an injured person may have some coverage through his or her own insurance policy.  This first party coverage may include personal injury protection (PIP), which includes medical expenses and lost wages.  When filing a claim against your own insurer, the terms of the policy, including the definitions, are critical in determining whether coverage applies.

In a recent case, an injured man challenged his insurer’s denial of his PIP claim. According to the court’s opinion, a driver parked on the street opened his door and struck the plaintiff, who was riding his bicycle.  The plaintiff was covered by a California insurance policy with up to $5,000 in medical expenses for an “insured” under the PIP benefit.  The relevant language in the definition of “insured” was “a pedestrian when struck by” a motor vehicle.  The policy did not define “pedestrian.”

The insurer denied the plaintiff’s claim on the grounds he was not a pedestrian because he was riding his bicycle when the accident occurred.  The plaintiff sued the insurer.  The trial court granted summary judgment in favor of the insurer, finding the term “pedestrian,” under its ordinary and common meaning, does not include a person riding a bicycle.  The plaintiff appealed.

END_OF_DOCUMENT_TOKEN_TO_BE_REPLACED

When a person is injured by someone else’s negligence in a Washington automobile accident, he or she may want to seek compensation from the negligent party.  In some cases, however, the negligent party may not have sufficient insurance or may be unidentified.  In such cases, the injured person may seek recovery from his or her own uninsured or underinsured motorist coverage.  If the insurance company denies the claim, the injured person may have to sue his or her own insurance company.

In a recent case, a man challenged the dismissal of claims against his insurer.  The plaintiff was injured while riding his bicycle.  There were no witnesses. The plaintiff cannot remember the accident, but believes he was hit by an automobile.  He suffered a traumatic brain injury and was in the hospital for 10 days.  He reported the accident to his automobile insurer.  The insurer denied his underinsured motorist (UIM) claim because it did not find evidence he was hit by a vehicle.  The insurer reopened the claim after being contacted by the plaintiff’s attorney, but denied it again.  The plaintiff sued his insurer for breach of contract, negligence, and violations of the Insurance Fair Conduct Act and the Consumer Protection Act.

The insurer moved for summary judgment, arguing the plaintiff failed to raise a genuine issue of material fact regarding whether he had been hit by a vehicle.  The insurer also argued his other claims were barred by the statute of limitations. The trial court granted the motion, and the plaintiff appealed.

END_OF_DOCUMENT_TOKEN_TO_BE_REPLACED 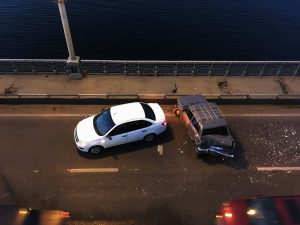 According to the appeal court’s opinion, the defendant rear-ended the plaintiff’s vehicle.  The plaintiff went to a chiropractor who found she had a ligament injury as a result of the accident.  The chiropractor also found the injury was permanent.

The plaintiff filed suit and the defendant admitted liability, leaving only damages at issue for trial.  According to the opinion, the plaintiff worked as a licensed practical nurse.  She testified she had talked with her colleagues about her treatment options.  She did not want to take medications that would interfere with her work, or to have surgery or injections.  She testified the chiropractic treatments helped manage her pain.  She also testified that immobilization was no longer recommended and that no one she talked to recommended it to her.

END_OF_DOCUMENT_TOKEN_TO_BE_REPLACED 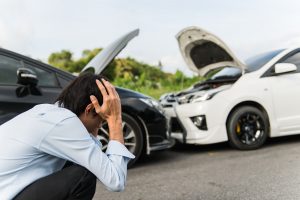 END_OF_DOCUMENT_TOKEN_TO_BE_REPLACED

In Washington, drivers involved in an accident resulting in injury must stop at the scene and remain there to give their name, address, insurance information and vehicle license number to the other driver, passengers or anyone who was struck or injured.  Pursuant to RCW 46.52.020, drivers must also show their driver’s license.  They must provide assistance to anyone injured, including getting them to medical treatment.  What happens, though, if a driver is shaken up and fails to provide all of the required information? A Washington appeals court recently considered whether a case could proceed when the plaintiff originally filed suit against the wrong party after not receiving all of the other driver’s identifying information.