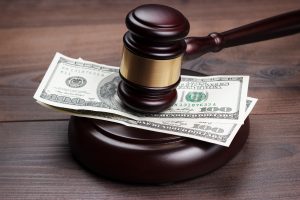 The wife was a doctoral candidate when the couple married.  She finished the coursework, but stopped working toward her doctorate when she became pregnant with their second child.  She did not return to her studies.  At the time of the divorce, she did not work outside the home.  The trial court found she had “significant medical issues” that prevented her from working full time.

The trial court awarded the husband his checking account, car, inheritance, personal property, and future stock of his employer.   The wife was awarded the remaining property, including bank and retirement accounts.  She was also awarded child support and spousal maintenance. Additionally, the court ordered the husband to pay the wife’s attorney fees from the stock awards he had been awarded by his employer but which had not yet vested.

Many issues were litigated through various motions.  Ultimately, both parties appealed.  Although many other issues were addressed on appeal, both parties appealed aspects of the stock option distribution.   The wife argued, in part, the trial court had mischaracterized the stock options that had already been awarded as the husband’s separate property.  There were three stock options awards at issue in the appeal, all of which were partially unvested.  There was an “On Hire” award in April 2014, a “FY 14 Annual SA” award in August 2014, and a FY15 Annual SA” award in August 2015.  The court noted that the husband would have to remain with his employer for the remaining shares to vest.  A percentage vests annually at the end of August.

The husband appealed the trial court’s award to the wife of half of any future stock awards.  The appeals court noted that RCW 26.09.080 requires the court to consider the nature and extent of separate and community property, the duration of the marriage, and each spouse’s economic circumstances.  The court then must make a “just and equitable” distribution of all property, whether community or separate.  The trial court has broad discretion in determining a just and equitable distribution, and will be overturned on appeal only if there was a manifest abuse of discretion.

This case shows that a court must thoroughly review the circumstances surrounding an employee stock option award to properly characterize it.  It is not a simple matter of when it was awarded or even when it vests.  Furthermore, this case illustrates the trial court’s broad discretion in distributing all the couple’s property fairly and equitably, including the separate property.

If you are facing a divorce, an experienced Washington family law attorney can help you protect your rights through the complexities of property distribution.  Call the high-asset divorce attorneys at Blair & Kim, PLLC at (206) 622-6562 to discuss your case.